The latest title sent to me by Bethany House Publishers for review is the newly-published Contemporary Christian Fiction book  Finding Me by Kathryn Cushman. 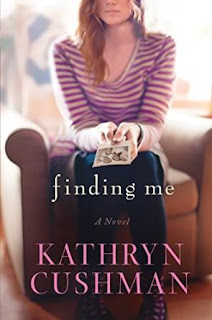 This novel is about a young woman named Kelli Huddleston, who was told by her father that her mother and two siblings died in a fire when she was just an infant.  When her father and step-mother die, she finds herself in a quandary as she discovers pictures and newspaper clippings that indicate her father lied to her.

The book opens up in the past, 26 years before her parents’ deaths.  In the scene we find a man named David, flirting with a waitress in a diner, in a tempting situation that we can only think will end up poorly.  We find his state of mind and intentions definitely conflicted when the book tells us, “Okay, he should probably stop coming here so often.  Maybe just tomorrow, and then he would stop.”

Then the book brings us to the present day, where we learn of Kelli’s discovery of the betrayal from her father.  Kelli leaves her home in search of a family she never got to know, in the town they now live.

Throughout this story Kelli not only learns about her former family, but helps Kenmore, a man who was ready to close the doors of his store in the small town of Shoal Creek, Tennessee.  While there is initial suspicion about her from Kenmore’s son Shane, Kelli and Shane end up becoming friends.

Kelli learns more about what happened with her father and step-mother Mimi from her step-grandmother Opal, who sends Kelli letters written by Mimi years ago.

Kelli brings new life to the store, grows to like Shane, and meets her mother, brother, and sister, eventually revealing who she is to all of them.  By the end of the book, Kelli must make the decision whether to return to her home, and whether she will continue being involved in the lives of the people of Shoal Creek, Tennessee.

This was a good read, with the message of the power of hope and redemption, found in an unusual situation.  I will definitely read more novels by Kathryn Cushman, and recommend this one to all.

What a joy it was to read the latest book Bethany House Publishers sent me to review.  The newly-published novel A Love Like Ours by Becky Wade was well worth my time. 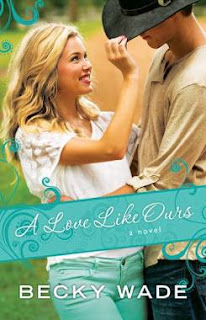 This is a story of Lyndie James and Jake Porter, who seemed inseparable as children until Lyndie’s family had to move away to California when they were still children.  They had a special bond, and adored one another.

The Prologue gives us a clue as to how close, opening with:
"Twelve-year-old Jake Porter never felt a hundred percent right unless Lyndie James was beside him.

They were a pair."

Twenty years later we find Lyndie returning to the town of Holly, Texas, home of her childhood memories, hoping to get a job at the Porter family ranch, Whispering Hills Horses.  It’s there that she looks for her old childhood friend, Jake Porter, who is now a former marine who suffers from PTSD. While he knew nothing about what she’d been up to all those years, she knew all about his career as a top-notch Thoroughbred horse trainer.  What she didn’t know was how badly hurt and damaged the war had left him.

Jake Porter reluctantly hires Lyndie to exercise the horses, and Lyndie finds herself dismayed, but hopeful, about Jake’s negative attitude.  Lyndie strongly but gently pushes Jake to let go of the hurts he’s harboring, hoping that he can heal when he gets a clear view of who God is, all the while asking God to use her in the process.

While feelings resurface from their childhood where Jake often protected Lyndie, we see Jake take on that same roll as Lyndie pushes more toward riding the race horses competitively.

Not only does Lyndie have her hands full with Jake, she finds herself in the position of trying find out why one of the stallions won’t run.

There is also an underlying story of redemptive love for Lyndie’s new friend (and neighbor) Amber that keeps you cheering for good as well.

Overall this is a wonderful story that kept me eagerly reading from cover-to-cover.  I could easily relate to the characters, and enjoyed the real-life situations author Becky Wade wonderfully penned with perfectly-placed humor, sass and seriousness.  I enjoyed the redeeming theme that not only relates to the characters, but comes across with hope to the reader as well.  I highly recommend A Love Like Ours to anyone who enjoys Modern Christian Romance novels and wants a truly good read.  I’m sure you’ll find it as much of a delight as I did.

I give this one a definite “two thumbs up”!

Posted by Unknown at 4:53 PM No comments: