Mysteries abound in many family trees, and even more so if that family heritage and lineage is unknown to us.  Thus is the case of Alonnah "Loni" Ford, and American businesswoman who is suddenly thrust into a legacy she never knew existed.  This is the main theme of "The Cottage", one of many fiction books by author Michael Phillips. 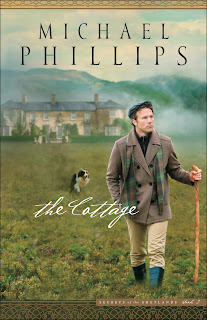 The setting for "The Cottage" is a modern 2006, and the aforementioned Loni Ford has her life given quite the surprise at the death of one Mr. Macgregor Tulloch.  Macgregor Tulloch turns out to be a distant relative on her mother's side and the former laird (lord - as in landlord) of Whales Reef, Shetland Islands, Scotland.  His death and the subsequent search for an heir to his title leads to Loni, and she becomes the heiress to the island.  Yes - you read correctly - the island - and the entire estate therein.

Loni at first decides that she would rather sell it and continue with her life in the States unaffected by the situation.  Her boss, Madison Swift, convinces her she should at least go to the island and see exactly what all of it entails.  She, out of sound advice and her own curiosity about her unknown genealogy, decides to do just that.  This proves to be a bit bewildering and challenges Loni in ways she never considered.

As in many of these cases, there are often others who claim to have a part, or all, of family inheritances.  There is another on the island who claims that he is the rightful heir to the estate in its entirety.  Thus enters one bitter fisherman by the name of Hardy Tulloch.  This man joins the efforts of an oil tycoon from Texas to try to get the island in Hardy's name, with less than honorable plans. Sort of like making a deal with the devil.

References to the reformation of Christianity in Scotland, the development of the Quakers, and the details of the change in how aristocracy works among the people makes for another interesting part of this story.

Sometimes visiting your childhood home and taking time to listen to God amidst the confusion reaps peace and clarity one doesn't expect.  Thus is the case for Loni as she travels back to her grandparents in America after the confusion of all that transpires.  It is there that she finds that the Lord has a surprise or two, and gives her the peace she needs to continue her journey.

A small island, villagers with big hearts (and big mouths), letters and a journal from the past, and a wool factory all take their place in this very delightful book.  Of course, let me not forget to mention the island's Chief, an interesting man by the name of David Tulloch, whom many of the islanders believe to be the rightful heir.  You'll have to read the book yourself to see how his presence changes the grande scheme of things.

While "The Cottage" is Book 2 in the series Secrets of the Shetlands, it stands alone very well.  Once again, I'm thrilled that Bethany House provided this book for me to read and review.  Michael Phillips is becoming one of my favorite authors and I look forward to reading more of his books.

Twists and turns, questions and sometimes surprising answers, and a little bit of romance make this a read well worth your time.

"The Cottage" by Michael Phillips gets 'two thumbs up' from me!
Posted by Unknown at 2:56 PM

I love hearing from you!